Literature allows us to share in the experiences of others.  This young adult novel spans three time periods (1942, 1994, 2015) and tells the stories of three refugee families fleeing terrorism and seeking asylum in new countries.  The young reader can appreciate the differences and similarities in the paths traveled by the German, Cuban, and Syrian families, as well as the historical contexts of their forced immigration.  This motivational trailer sets the stage for the novel.

Why should young adults read Refugee?  There are so many reasons!  Most importantly, through reading they develop critical and informed thinking, empathy for other ways of thinking and being, and awareness about issues related to equity and justice.  Through close reading and robust discussion about the book, they begin to understand the reasons people immigrate to other countries.  They generate informed, analytical, and empathetic perspectives about families’ choices to immigrate.  Currently, immigration is at the forefront of national and international conversations, and this book is perfect for promoting further dialogue and action.

It’s also such a good read!  The characters, about the same age as middle school students,  are forced to “come of age” during their journeys.  They assume unexpected responsibilities in the three stories, yet remain strong and resilient.  A surprising twist in the three tales reveals the “Six Degrees of Separation” theory.  The basic definition is that, “you start with someone, look at everyone they know (where “know” would have to be defined in some way), then look at everyone that those people know, and see what happens.”

I highly recommend this book!!!  You will like the theme of family and what that means.

A companion text for this book is The Only Road by Alexandra Diaz. 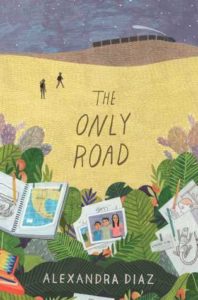 The title of the book reveals the its theme.  The protagonists, Jaime and Angela must flee their home in Guatemala.  Their cousin, Miguel, has been murdered for resisting the Alphas, a violent, drug trafficking gang.  If Jaime remains he faces recruitment or a similar fate.  He also fears for Angela’s safety in this brutal town, so the two of them flee to the United States.  They hope to to live there with his older brother in New Mexico.  They figuratively and literally have only one road to travel – so, they begin their journey with trepidation and fear.  They do not choose this path – it has been forced upon them.

As I progressed through the chapters, my heart ached for Jaime and Angela.  They fall prey to smugglers and bandits, face starvation and illness, and face grave dangers while traveling atop the train to the north.  They only have each other to rely on, and they are just children.  No one cares, takes pity, or assists them on their journey.   They are homesick, tired, and disheartened.  This book was difficult to read, but allowed me deep insights into the “only road” many immigrants travel for a better life in a new home.

The author, Alexandra Diaz, is the child of Cuban immigrants.  She writes from the heart with passion, eloquence, and insider perspectives.  The theme of “home” resounds throughout.

Hope you check out these two timely and action-packed young adult novels!  They put a face to the countless, nameless refugees seeking asylum around the world.

Books About Reading and Writing