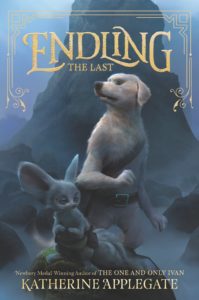 I am halfway through my summer reading list, and would like to share my impressions as I go along.  I preface my review of Katherine Applegate’s book with a strong endorsement.  I put my biases upfront.  I adore this book!

Not since the little mouse from The Tale of Desperaux, have I truly fallen in love with a character.  That is, until I met Byx in the fantasy story Endling the Last.  She totally captivated my heart.  Byx could be mistaken for a dog, but she stands upright, has a coat of incredibly soft hair that shimmers in the sunlight, has opposable thumbs like a human being, can glide through the air, and has the ability to speak.  Sadly, after a tragic incident in the beginning of the book (her pack is hunted and killed), Byx believes herself to be an endling (the last of her species).  She thinks she the only remaining Dairne in the Kingdom of Nedarra.  I grew to love Byx’s optimism and bravery despite harsh circumstances, and loyalty to those she would befriend along her journey.  Her new friends could be categorized as anthropomorphic in nature, having human traits, emotions, and intentions.

This book was so novel in craft and structure, that I could not put it down. I felt as if I was traveling with Byx seeking out remaining Dairnes and discovering her identity as a “pathfinder.”  To clarify, the Dairnes are one of the “Governing Species” (humans, felivets, raptidons, wobbyks, natites) in the Kingdom of Nedarra.  Dairnes have the ability to tell if any of the other species is lying, which makes them a target for elimination by those who seek domination in Nedarra.  This is the survival predicament in which Byx finds herself, and around which the plot revolves.

The characters and settings are so unique in this fantasy book, that I was glad Applegate provided a map of the kingdoms within the front and back covers.  I found myself reviewing it to retrace Byx’s steps, and to envision where she would go next on her journey.  It was also helpful in understanding the locations/characteristics of the “Governing Species.”  The book’s plot has twists and turns that provide surprises and changes in characterization.  In many ways, this young adult novel has dytopian aspects as people do not act like contemporary societies.  Yet, I can see how certain political mindsets might represent the species’ actions and dictates.  The strong theme of family is evident throughout.   Discussions about what constitutes a family could easily evolve after reading this book.  Another strong theme is the environment and the preservation of all species.

Nedarra borders another kingdom called Dreyland, and the ending of the book is wide open for a continuation.  I can’t wait to see what Byx, and her new family, will discover in book two!  I’ve attached a trailer I think you might enjoy.  Below, you will find also Katherine Applegate’s introductory videos.